Del Norte County District Attorney on Randy Waltz Case: 'I Must Uphold the Law Without Fear or Favoritism' » 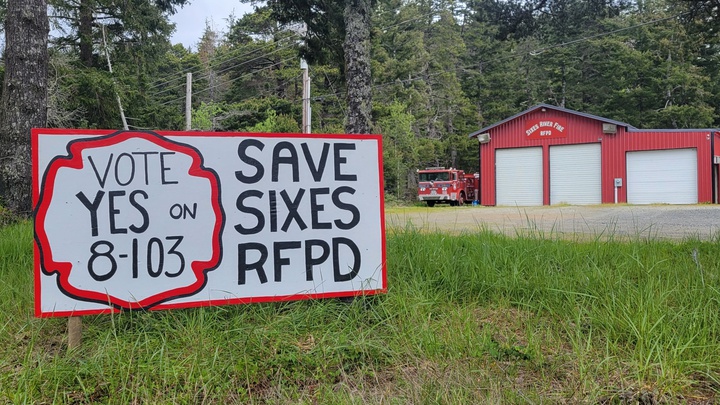 A "Vote Yes on 8-103" sign outside the SRFPD firehouse. | Photo by Ashley Moore.

One week away from the Oregon primary, Curry County’s volunteer firefighters continue to seek support from voters to sustain local firefighting budgets through Measures 8-103 and 8-104.

Sixes Rural Fire Protection Department Chief Wayne Moore is stressing to voters that Measure 8-103 is a renewal of the same levy that voters approved five years ago — a tax of $1.375 per $1,000 of assessed property value.

“We’re not asking for more than what we had been, we’re just trying to renew what we had,” Moore told the Outpost.

The levy is the largest source of tax funds for the SRFPD, generating approximately $51,500 per year. Without the levy, the agency of about 15 volunteers, which covers fire, medical and general emergency calls within a 42-square-mile radius between the Elk River and the Bandon/Port Orford KOA, would have an annual operating budget of roughly $17,000. If Measure 8-103 fails to pass, Sixes Captain Ashley Moore told the Outpost that the department would ultimately shut down sometime after the current levy expires.

“ [The department’s tax base] doesn't cover our operating expenses: fixing anything that breaks down, new equipment, safety gear, it does not cover any of that, so if the levy doesn't pass, we become non-operational,” Moore said. 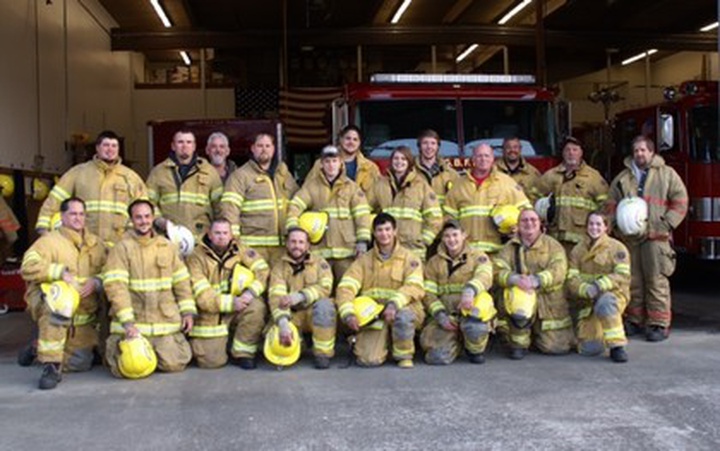 The Gold Beach Volunteer Fire Department is seeking similar funding in the primary election through Measure 8-104. The seven-year local option tax levy would provide the agency with $60,000 a year for new fire equipment and capital projects.

Gold Beach Volunteer Fire Department Chief Tyson Krieger told the Outpost that the City of Gold Beach prohibits departments from discussing measures after ballots have been sent out. However, Moore was able to offer insight into the difficulties local agencies face when buying expensive fire equipment.

“We're trying to get some grants for a new Jaws of Life, which costs about $60,000,” Moore said. “Older [extraction tools] aren’t always strong enough to work on newer vehicles.”

One of the main issues, he said, is that local volunteer departments don’t have enough funding to apply for large grants, which often require applicants to match the contribution for approval. Without these grants, departments are subject to using and maintaining outdated equipment.

“A lot of times we don't generate enough money to match the funds,” Moore said. “We’re continually trying to upgrade equipment and Band-Aid stuff together to keep it going.”

If passed, Measure 8-104 is expected to generate $420,000 for the GBVFD in the next seven years — possibly increasing property tax by more than 3 percent in the process. According to the ballot measure summary, the department plans to use some of these funds to purchase one or more fire trucks.

“One of our roles in serving on this committee is to speak for counties and entities needing help in firefighting planning, equipment, member recruitment, and supplies,” Boice said. “Ninety-nine percent of Curry’s Local Firefighters are volunteers. They deserve tremendous support and appreciation. Some funds can be targeted as partial matches and can always help in the long term for grant and other award funding.”

“I am in full support of our Curry County Fire Districts working to obtain as much help as possible,” Boice said. “The 2022 fire season is only a couple of weeks away.”

As of this morning, Curry County has received 3,511 ballots from a total of 18,989 eligible voters.